Back to Search Results
Previous
Next 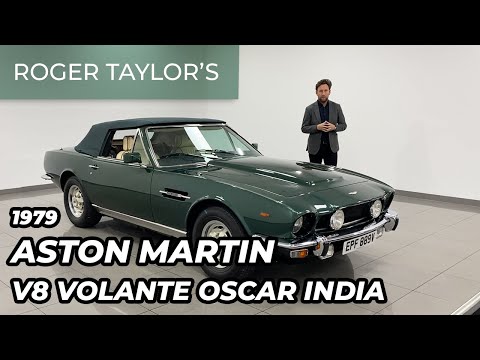 Price £149,990
How can I buy this car? Online payments and credit applications are simple and 100% secure
What is PCP?
What is HP?
X

Here we have a truly unmissable opportunity to own an exceptional and highly esteemed classic Aston Martin, one that has not only been immaculately preserved but also boasts a rather unique story dating back to its first owner further adding to its desirability for any Aston Martin enthusiast. Proudly introducing our 1979 Aston Martin 5.3 V8 Volante Series 1 Automatic originally supplied to rock legend & Queen founder Roger Taylor from H.W Motors Aston Martin on 26/10/1979. The convertible "Volante" was introduced in June 1978 with an estimated 439 examples produced between 1978 & 1986 which were based on the Oscar India & sure to be an appreciating asset for any collector. The Aston V8 Volante is perhaps the only classic car on the market that combines the subtly aggressive stylings of a muscle car with the luxury that matches any Rolls-Royce of the period & even featured in the 1987 James Bond "The Living Daylights". After being owned by Mr Taylor, the car was acquired by well-known Aston Martin aficionado, Howard Masters. Subsequent owners have maintained the car diligently adding to the extensive history file as one would do with a classic car of this nature. The original service book plus two continuation Aston Martin service books are with the car and document the supplying dealer services at 1,078, 4,500 and 9,370 miles before Ian Mason Aston Martin Services took over maintenance at 21,154, 29,488, 36,641, 42,689, 46,238, 50,485, 55,576, 64,060, 69,008, 70,839, 73,588, 75,459, 76,520, 78,206, 79,623 and finally at 80,199 miles in 1997. Runnymede Motor Company then serviced the car at 81,540, 85,046, 93,520, 99,381 and 101,536 miles. Last service by Fisher Performance Cars at 102,400 miles. Current mileage is 103,000 miles. Adding to the impressive service books are invoices for maintenance and service work dating back to the 1980s, MOTs going back over 20 years, spare keys and handbook. In later years the car was subjected to a full body restoration by Alan Smith Motors finished in the beautiful colour of Buckingham Green with Magnolia Leather re-trimming by Gary Wright. It is a reflection of the quality of that work, that the car was placed third at the Aston Martin Owners Club Concours at Blenheim Palace in June 2000. Presenting today in a superb condition in a colour scheme that perhaps suits the V8 Volante the best with the beautiful Burr Walnut dashboard and door inserts complementing the Magnolia leather piped Olive Green and Dark Green carpeting. All of our cars are subject to meticulous care and preparation by our skilled technicians and bodywork experts to guarantee peace of mind. To request a personalised

This is the manufacturer's list specification for this model, please verify the details when you view the vehicle. The list below will not include any additional options fitted to the vehicle or modifications.

This is the manufacturer's list specification for this model, please verify the details when you view the vehicle. The list below will not include any additional options fitted to the vehicle or modifications.

Please contact us for details of our used vehicle warranty.

Buying online is safe, simple and secure. More and more of our customers have enjoyed the simplicity of locating the vehicle they want and completing the sale in the comfort of their own home, in their own time. You can:

If completing the sale online isn’t the right solution for you why not secure the vehicle you want by using our fully refundable reserve online solution? It will remove the vehicle from sale allowing you time to plan a visit to see the car and then complete the purchase with one of our team. If you change your mind, no problem we will refund your fee in full.

From the comfort of your own home, simply choose your new car, configure your finance quote and then apply for finance selecting Click and Collect in the checkout delivery option. Alternatively you can pay in full or reserve your vehicle and discuss your collection option with one of our team who will be in touch after you have placed your order.

By adhering to strict social distancing guidelines, your car will be available to collect from any one of our locations. A member of our team will ensure your vehicle is fully sanitised prior to collection and all your documentation will be sent to you via email prior to collection.

Your safety is our utmost concern. Through our meticulous vehicle checks your vehicle will undergo a full sanitisation procedure and there will be no requirement to enter our showroom facility. Your vehicle collection and handover will require minimal interaction from our team.

Trustpilot
Free & Fast Buy my Car online. When selling or part-exchanging your car, it is essential to know what your vehicle is worth in order to get the best price.

What is Personal Contract Purchase (PCP)?

Personal Contract Purchase (PCP) is a finance product that allows you the opportunity to buy a new or a used car.

It is similar to a Hire Purchase agreement as you will usually pay an initial deposit, followed by monthly instalments over a term typically between 18 to 48 months.

What makes PCP different to Hire Purchase (HP) is that your monthly instalments are paying off the depreciation of the car, and not its entire value, over the course of the term. Then, when you get to the end of your agreement, there is a final, balloon payment that must be made if you want to keep the car. The balloon payment is often referred to also as the Guaranteed Future Value (GFV).

What is Hire Purchase (HP)?

Hire Purchase is a way to finance buying a new or used car. You will normally pay an initial deposit and will pay off the entire value of the car in monthly instalments. When all the payments are made, the Hire Purchase agreement ends, and you own the car outright.

Required cookies are essential to let you move around the website and use its features, such as accessing secure areas, shopping baskets and online billing. These cookies allow our website to provide services at your request.

Functionality cookies are used to remember the choices you make, e.g. your user name, log in details and language preferences. They also remember any customisations you make to the website to give you enhanced, more personal features.

Targeting cookies collect information about your browsing habits to deliver adverts which are more relevant to you and your interests. They also measure the effectiveness of advertising campaigns.

This site uses cookies and related technologies for site operation, analytics and third party advertising purposes as described in our Privacy and Data Processing Policy. You may choose to consent to our use of these technologies, or further manage your preferences. To opt-out of sharing with third parties information related to these technologies, select "Manage Settings" or submit a Do Not Sell My Personal Information request.